In adolescence sexual intercourse usually occurs, because at that age is growing up where at that time began to arise sexual urges in them. At that time their interest in fostering focused on the opposite sex. Along with the changes of the current era of cultural development is more permissive to the style of dating teens so that teens more dare to have premarital sexual intercourse. Some teens think sex during courtship is normal and common. It may lead to a permissive attitude, sexual experimentation supported by lack of accurate information, resulting in threats to the health and sexual behavior of adolescent teenagers. Parents and adolescents, self esteem, peer pressure, religiosity and exposure to pornographic media have significant influence either directly or indirectly Directly to premarital sexual behavior of teenagers Many teenagers who do not quite understand the dangers of irregularities in their behavior. Objective To know the description of Nursing Academic students who have engaged in sexual behavior influenced by peers on campus or off campus. Method This study was an observational study using cross sectional study. Research location in Akper Notokusumo Yogyakarta. A sample of 300 students. Results showing high peer influence variables with mild pre-marital sexual behavior had a prevalence ratio of 1.53. Students who get high influence from peers have a chance to premarital sexual behavior almost 2 times higher than dengam students who get low influence from peers with results p = 0.001. 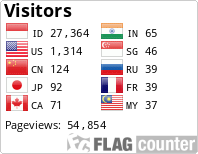